Fetal Alcohol Syndrome Is About So Much More than Facial Characteristics 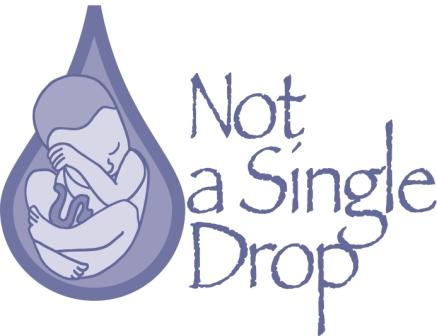 I married into a family that includes two young women born to (the same, as it happens) birth mother who drank. They were both diagnosed early on with Fetal Alcohol Syndrome (FAS).

I had heard of of FAS, and I had heard of the “Not a Single Drop” campaign, whose logo is attached above. But I didn’t understand how seriously the campaign should be taken.

There’s a range of kinds of damage that can happen to fetuses who are forced to get drunk in utero, and the broader term is Fetal Alcohol Spectrum Disorder (FASD).

I have recently joined some online support groups for parents and caregivers of people with FASD, and the problems that they face are chilling…  heartbreaking… and really, incredible to anyone who has not themselves encountered them.

A lot of the literature that introduces the uninitiated to FASD includes pictures detailing facial features characteristic of the disorder. These characteristics are useful for diagnosis, but they are not foolproof; for example, there is a window of time (I’ve heard it described as the 19th day of gestation, but I can’t document that) during which craniofacial features develop in a fetus, and if a pregnant woman happens to be sober on a certain day, her drinking may not manifest in her child’s face. It’s a crap shoot.

The crap shoot is why the Not a Single Drop campaign was launched: studies and those who read them may disagree about how much alcohol causes how much damage in a fetus, but the fact remains that total abstention is guaranteed to prevent FASD. FASD is the most preventable birth defect.

While a description of facial features associated with FASD (namely, smaller than normal eye openings, a smooth philtrum–the ridge running between the nose and the upper lip, and a thin upper lip) may be dramatic, facial anomalies are only the beginning of the problems that can beset persons with FASD for their entire lives.

In fact, I have begun to think that encouraging women not to drink during pregnancy by showing them pictures of kids with FASD could be described as downright misleading, because it tells so little of a story that can be really dire.

A study reported in February 2018 (and not just any study: this one was reported in JAMA, the Journal of the American Medical Association) tells that the researchers have concluded that FASD may be as prevalent as autism, and maybe more, since a lot of clinicians don’t know how to diagnose it, so it goes underreported, or camouflaged as autism, ADHD, Oppositional Defiant Disorder, or another better-known condition. Unfortunately, laziness can come into play as easily as ignorance when it comes to diagnosis.

FASD affects the central nervous system (it is known that the CNS starts to develop on or about the 19th day of gestation); the skeleton (sufferers may have smaller-than-normal skulls and joint and finger defects); the brain and nervous system; and the heart, kidneys, and eyes.

Those are just the physical symptoms that could complicate the lives of people with FASD, and they are not to be underestimated: they can all mean a lifetime of doctor visits.

Far more complicated are the functional problems that affect not only the sufferers but their whole families as well.

Because kids with FASD are, by definition, born to mothers who drank while they were pregnant, the mothers may not be fit for parenting–if they survive their pregnancies at all; one of my daughters was born to a comatose mother–and so many of them live with adopted families.

FASD rarely manifests early on, and so many adoptive parents are taken by surprise as their FASD children’s development suffers delays. Functional features of FASD include intellectual disabilities (we don’t use the word “ret***ed” any more); developmental disabilities; learning disabilities; deficits in “executive functioning,” including, attention, memory, inhibition and filtering, planning, reasoning, and problem solving.

FASD is often co-occurring with psychological disorders such as the abovementioned Oppositional Defiant Disorder, Reactive Attachment Disorder, Sensory Integration Disorder, and Depression. Some clinicians identify FASD traits as Borderline Personality Disorder or Conduct Disorder, and one can scarcely blame them.

People with FASD can be very negative (critical and complaining) to live with, they may make up or embellish stories, and they may be stunningly manipulative. They may be combative, and they may not be afraid to tangle with police.

Even this description is terribly theoretical. Folks I’ve met through the support groups report ruined families, ruined finances, damage to homes and family members, and endless loops of bureaucracy and legal problems that keep them unproductive for anything else (marriages, their other kids, jobs) for years on end. Adoptive parents often have to ask if it would be better to turn their kids back over to the state to protect both the kids and the integrity of their families.

Not that it’s any picnic for the kids, who didn’t even choose to imbibe through their umbilical cords and placenta walls. They live a life that few could wish on few. As I often say to my loved ones, “You have trouble understanding this head? I have to live in it!” Imagine, if you will, trying to make sense of the world with fewer working brain cells than you already have.

It takes unimaginable courage to face some of the challenges posed by the damage caused by alcohol in fetuses.

Pictures of facial features don’t even begin to describe how desperately important it is for woman not to drink while pregnant.

A summary of the JAMA article: http://time.com/5134900/fetal-alcohol-syndrome/