HOW INTIMACY HAS SMASHED THROUGH MY DEFENSES, PART I: A SHORT COURSE IN MY ENNEAGRAM TYPE 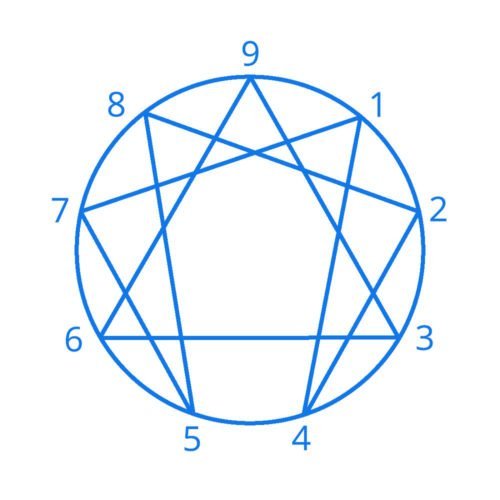 Nearly half my life ago, circa 1990, I was first exposed to the Enneagram as a personality-typing tool that might give me insight into how I operate vis-à-vis members of my family of origin. The first book I read on the topic reflected Jesuit explorations of the tool for spiritual growth.

I have studied, though not become an expert on, the Enneagram over the years, enough that I have been able to learn a lot about myself from it and enough to see it grow in popularity among psychologists and business coaches. It’s an incisive though not scientific way of looking at behavior—or, some would point out, misbehavior—and so, because it is not scientific, it gets likened to tools such as astrology and numerology… or at least the Myers-Briggs Type Indicator (MBTI).

The Enneagram (“ennea-“ comes from the root meaning “nine”) is a figure consisting of a circle with what looks rather like a nine-pointed star inscribed in it but is actually two shapes. The points interlock by way of the lines in the “star.” I continue to be fascinated with how the characteristics represented at each point relate to one another. Those relationships are complex and thought-provoking should you care to let your thoughts be provoked by them.

The nine points are not hierarchical; that is, Nine is no better than One. They are just places on the figure.

Especially in the earlier years in Western writing on the subject, when I was first exposed to it, the way of discovering one’s Enneagram type was through examining one’s preferred compulsion—one’s basic driving force. You looked at the one thing that you wanted to avoid at all costs, the thing to which you most wanted to devote your power.

My preferred point on the Enneagram it was clear, was Eight, the type that, depending on the theorist, may be nicknamed, among other things, the Protector, the Challenger, the Asserter, the Warrior, the Leader, the Chief, the Top Dog, or, most flatteringly, the Bully. (If you’re interested, I’m an ESTJ, a.k.a. the Executive/Supervisor/Organizer/Administrator.)

Eights typically will do anything we can to avoid being, or even perceived as being, weak. We tend to think, the book asserted, that to be good is to be strong. We are inclined to take an offensive stance in life, to push against our world and to suppose that we are big enough with inner resources enough to do so successfully. We act from our guts first and our heads second; we frequently need to be called back to our hearts. Some people call our basic sin lust (for power, I suppose), but the first book I read identified it as arrogance.

Many theorists suggest that we were dominated or somehow taken advantage of in our early lives and that we spend the rest of our lives as crusaders to compensate for how power was misused against us. We are typically looking for a cause to champion, and we are willing to take hits in the ones we choose.

Eights are not always bullies, and at our best we are inclined to be, if dictators, at least benevolent ones. We’re courageous, that’s for sure. A lot of people think that we are always complaining, but the book says, and I assert, that we are simply calling attention to things that we think deserve further attention. A lot of prophets have been Eights.

What brought me up short on my first reading of the book all those years ago, and what sticks with me all these years later, is the matter-of-fact statement, “They do not like to face the fact that in spite of their outward behavior of strength they are marshmallows inside.” Well, it doesn’t just stick with me; it has smashed through my defenses.