Khrysso’s Thoughts On Changing the Words to Songs 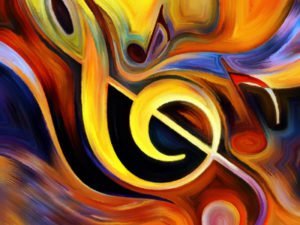 It is an interesting analogy that [my colleague] provides, comparing the changing of words in a musical composition with changing images on a piece of visual art.

As one who has published music, I am acutely aware of how it feels not to want my compositions to be messed with. In fact, in the piece I had performed last December, I specifically vetoed a move by the assistant director to change just a couple words, and I was adamant about it. I am glad that they honored my instructions, but I am aware that they could have ignored them.

As a folk musician, I am acutely aware of the folk process and of the difference between the map and the territory. The fact is that music is ephemeral in a way that a painting is not: even when we capture sound magnetically or digitally, we have only captured one musical event. Ultimately, the only control we have over the way a piece “should” be played is what we put down when we notate the music, but, like a map, notation is only a graphic representation. No matter how scrupulous we are, we are always “changing” music whenever we perform something that we have only have had in our hands as notation. When the variations are subtle, we call it “interpretation.”

The fact is that academically-trained musicians have agreed to canonize a certain level of change that they covenant to call “interpretations” (fermatas, for instance, are essentially advance permission to vary), and any changes that transcend that level of severity go into a canon of unacceptability, where composers, by custom and covenant, are granted the privilege of crying “foul.” Folk musicians have a much larger canon of variations that are acceptable while still calling song X “Song X.”

The reason why we cooperate with the wishes of composers is because we will to do so. The fact is that we can will not to, and we can even get away with it. Until we get caught–or until we check in with composers to ask their permission to make changes–it’s between us and our conscience. In fact, even after we check in with composers, we can still opt to flout their wishes and take our chances that we won’t get served with cease-and-desist orders or worse.

“The folk process” refers to the fact that music changes in our minds, which is of course where music originates. What is there, objectively, that says that changing pronouns is qualitatively any different than changing dynamics or where breaths are taken or whether the final note is four or three counts long?

Compliance such as [my colleague] describes is a matter of conscience and covenant. It doesn’t have to be; we’ve just made it our practice here because we are sensitive and aware people.

That’s where I’m at this afternoon; who knows what I’ll think tomorrow after this conversation continues? Take what you like and leave the rest…